let’s continue with some more miniatures from the set from Comedy Lord Boxed Set from Grenadier (here you can find part 1 of the article): 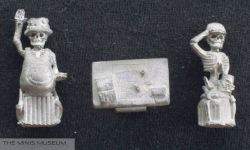 Interesting bunch of nerds, one is probably the game master, not sure which one. The chubby one seems more bossy, but his hand is in the air, as if asking permission for something, he’s also ready to roll some dice kept in his left hand. Nice t-shirt, by the way!

The other figure has a soda can in his left hand and keeps the right one on his cap’s visor. It’s also easy to imagine him on a beach, shielding his eyes (well, dark and empty sockets) from the sun.

The table has on it an open book (1st edition D&D), some rolled dice, a small unidentified box and the drawings of a map can be seen. My version doesn’t seem to have the pen near the unidentified object, like the one seen on Lost Minis Wiki.

A funny piece, the figures are caught in the act of playing and their poses aren’t too static.

Under the base  of the soda skeleton there’s a light text originally written with some hand tool (or small and light rotary tool) “1988 GRENADIER F.F. 3″ 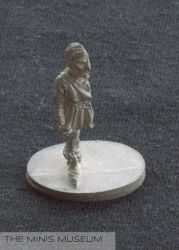 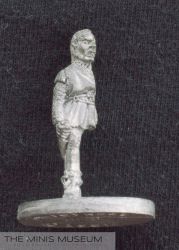 The half can really be identified as elf’s, with a chain shirt and a dagger… Nice thing is, there are innards details along the “cut line”: 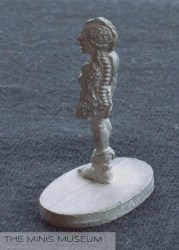 …other unusual details to paint, especially because it will coexist with normal skin, clothes and accessories and there will be a strong contrast line dividing the two. Those should be painted as “good” elf organs, and not as those of a demon or some horrible monster, not even a zombie’s!

Under the base  the text is: “GRENADIER” “© 198″ all stamped, the last symbol for the year seems originally written with some hand tool (or small and light rotary tool), it’s not very clear but could be a “5” (or also “8” for congruency), is also visible a “F.F. 11″, probably. 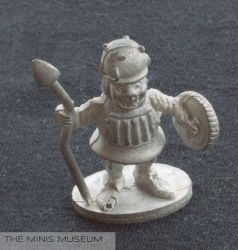 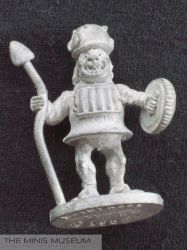 hmmm… the idiocy here is tangible, a blank stare, tights +1 and a Double Bent Spear of the Doomed, accompanied by a toothless grin, but let’s take a look at the heavy armour:

-Very Soft Cloth Shoes of the Fakir, left one with a big toe hole, a priceless feature

Under the base  the text is: “GRENADIER” “© 198″ all stamped, the last symbol for the year seems originally written with some hand tool (or small and light rotary tool), it’s not clear but could be a “8”, maybe, there’s also a “F.F. 6″ or something similar. 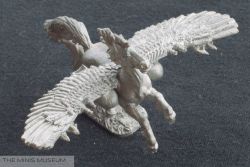 A Pegasus ready for an air strike, the wings accomodate double-barreled machine guns and more air-to-air and air-to-ground armaments can be seen underneath:

The horse itself has nice proportions and a muscular body, some smoke and dust clouds can be seen near his back hooves, ready to take off… Under the base  the text is: “GRENADIER MODELS” “© 1988″ all stamped, the last number for the year seems stamped later. Originally written with some hand tool (or small and light rotary tool): “F.F. 8″

See you later with the third (and last) part and more awesome Grenadier miniatures!….