I’ve been lucky enough to put my hands on this very nice Comedy Lords Boxed Set from Grenadier Models Inc. from 1988 (code 6009): 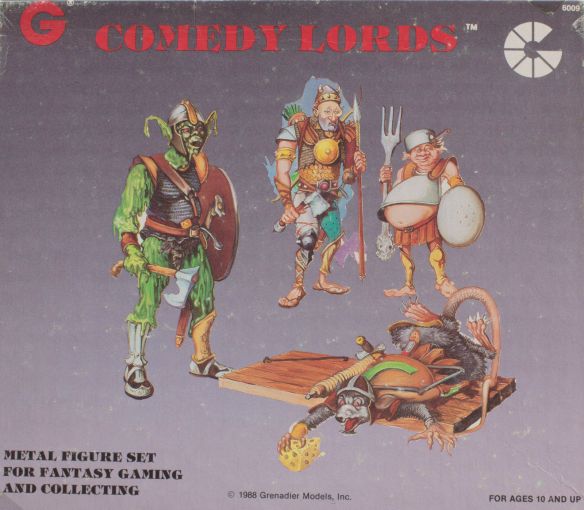 It contains 12 miniatures, plus the bonus “Invisible Stalker” (?!) figure, credits for box design to Raymond Rubin, for figures design to Andrew Chernak.

Chernak was head sculptor at Grenadier and one of the founders with Rubin, from a fast web search I think he’s still working as sculptor (bronze statues), artist and military historian, I couldn’t find more info on Rubin.

Grenadier was one of the biggest miniatures producing companies in the 80’s and 90’s and was in business from ’76 to ’96, they laid the foundations for all the other producers that came after them. Some of Grenadier miniatures have a very distinct look and pose and you can identify them immediately (for example Nick Lund’s orcs and dwarves, we’ll speak about them in the future….).

The company was really prolific and has very different ranges, Terence Gunn has also written and published a book on it: The Amazing Worlds of Grenadier, I’ll try to get one, it’s a must-have for minis fanatics…..

Curiosity: Grenadier got his name from the first figure sculpted by Rubin.

This is the presentation text found inside the box, to let you “feel” the subject:

the minis pic from the same sheet of paper: 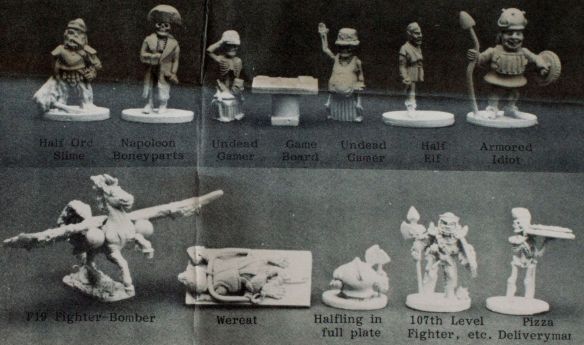 Now let’s take a closer look at each one: 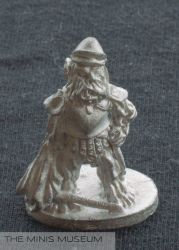 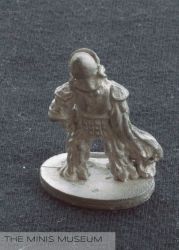 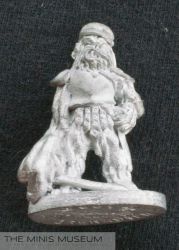 Nice figure, not the best “heroic” sculpt, but the sliminess is tangible, in the  back there are some impressive, waxy drips, from right arm and legs. Good to experiment some oozy effects when painting it!

He’s armed with a sword and protected by a breast plate and an helmet, probably the orc-half needs some protection from hits….. guess is there still are some bones inside to keep him standing and some internal organs aren’t completely jellied. The sword-wielding arm is elongated and enlarged, almost shapeless, pouring out of the right pauldron, while left arm is more defined, there’s a hand on the scabbard and a cowter (elbow protection).

The half slime part is obvious, if the other half is human, orc, elf or some other antropomorphic type isn’t so immediate, in my personal opinion the head could have been created a bit more orcish, if the original intent was a jelly greenskin (just slightly more jaw!). At the time the rpgs didn’t offer a lot of half races alternatives and the most common combat-oriented was probably the half orc anyway…

Under the base  the text is: “GRENADIER” “© 1988″ all stamped, except for the last “8” that seems originally written with some hand tool (or small and light rotary tool). There are other symbols, very light, could be an “F.F. 7″, it’s also possible to identify a “W” letter (or a “M”). 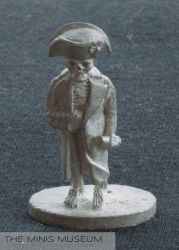 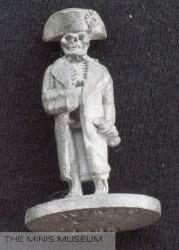 Very nice figure, statuesque pose. A clear Napoleonic mark, the hand-in-coat is present, as well as a spyglass (I think) on the left hand, suggesting an ongoing field action…

Boneypart is maybe a bit meaty on the back and seems to have something (heels?) under his skeletal feet, but  those details accompanied by a slight asymmetry on the head and shoulders give him (a lot of) presence.

Under the base  the text is: “GRENADIER” “© 1988″ all stamped, except for the last “8” that seems originally written  with some hand tool (or small and light rotary tool).

The first reference I’ve found about the idea for this miniature (well, at least his name), goes back to Grenadier Bulletin number 10, where the top skeleton miniature in the following picture is called, in the joking text, Napoleon Bony-parts: 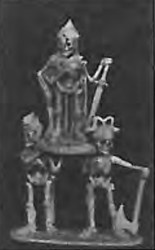 I’m pretty sure those are from Skeletons Raiders of the Undead boxed set (6002). Or, is the left one Pizza Deliveryman from this set? …naa, just his “dad”…