Here we are with the last part on the Comedy Lord Boxed Set, if you’re looking for the previous parts here they are: part 1, part 2.

I will take a look at the last 4 Grenadier miniatures shown in the leaflet found inside the box, plus the mysterious Invisible Stalker figure (we shouldn’t forget): 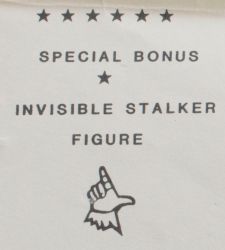 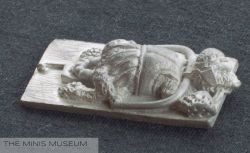 The careless guy equipped with leather armor and cap has been caught in a (rather large) mouse trap. It seems his long tongue still tries to reach a generous slice of cheese, held by his now cold fingers. 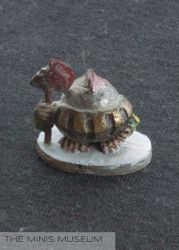 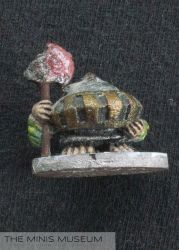 That’s the only mini of the set I got already painted, I will eventually strip and repaint it when the time comes. Of course  it could take years or forever, I got a HUGE amount of minis, that’s the reason for The Minis Museum itself. Oh, and I would like to paint all of them…

Funny note: the Halfling in Full Plate is the only figure facing the wrong direction in the leaflet picture…

Basically is a large close helm containing an halfling, equipped with an halfling halberd (probably an hand axe from the point of view of other type of characters…).  What can I say, this relentless fighter has its charm too.

Probably the most serious-looking miniature in the set, hand in hand (well, ooze) with the Half Orc Slime from the first part: 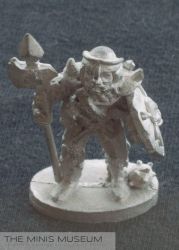 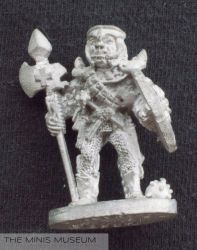 A walking armoury by itself, he displays an impressive list of equipment, weapons mostly:

It’s probably a quote of the common behavior for a lot of roleplayers – the Power Gamers type, that tend to amass a lot of equip. All that stuff cannot realistically be carried around by a person while doing something else. They’re usually waiting for someone with enough money or magical items to sell them.

He’s the good companion of the Gamers from part 2: 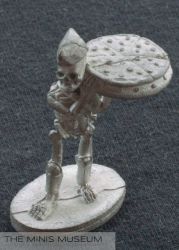 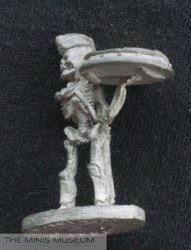 Nice deliveryman hat and skeletal features, but the best part is the long sword at the hip and the schynbalds (lower legs armor). The pizza is also carried on a round shield!

It possible to feel, from pose and equipment, that the guy is ready for everything that could wait for him at delivery….

And finally, the centerpiece: 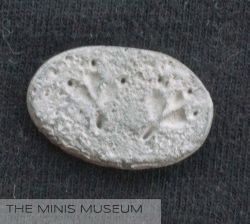 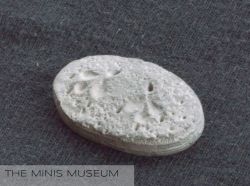 Yes, it’s a base… with marks of some human-sized bird of prey…

Detail is very good for being just a base, at least it’s enough to start to imagine what  kind of foul creature could be there, invisible, awaiting to strike.

Plus, what else could you expect from a “Comedy Lords” box?

Detail is very good and quality of casting is in line with the other products from the 80’s. As I said already, Grenadier’s miniatures have a characteristic look, thanks to their sculptors and their history.

I love the set, the figures have got plenty of personality, of course they’re not the most epic or “heroic scale. Nevertheless there are very few funny miniatures examples around, especially focusing on the geeky behavior of their users and fantasy worlds/RPGs situations.